Adapting Tech For The Global Crisis

It’s been a while but I am back with a fun new tech update. First off, because nothing else is more important, let’s talk about the progress of Apple and Google’s collaboration for contact tracing.

As reported by The Verge:

the companies also laid out six specific principles that public-sector partners would be expected to uphold. Most notably, the apps can only be used for COVID-19 response efforts, will be restricted from using Location Services, and require opt-in consent before accessing the API or sharing a positive diagnosis. They also will not allow any form of targeted advertising in the resulting apps; any existing apps using targeted advertising or location services will need to turn off those systems before they access the API.

In the coming weeks, we will see where this takes us, on our phones.

While individually when someone tries to make such an app, it might not work quite as seamlessly as Apple and Google’s because they have the access to override Bluetooth behaviour on an OS level which no one else does. It seems like a clever, helpful idea. While there was a time last year when trusting a software company with any kind of data seemed like a mistake, things are different now. We live in a very different world, and health safety trumps everything else. Plus, according to the report from The Verge, we will not see ads based on where we were. As far as I can tell, and I have been following this since it was announced, it is something that is truly going to help rather than gain something out of unsuspecting users.

On a different topic that is completely unrelated to coronavirus, a fantastic developer Cyril Diagne has shown the use of AR technology that changes the way we see the use of AR. Here, no words can do it justice:

It really changes the meaning of bringing real life objects into tech. It may not be ready for widespread use just yet, but it is definitely something that I had hoped to see in 2020.

On a related note, Google Lens can now copy paste handwritten notes into Google Docs. Now this is great for me. I write articles in my notebook, at least twice a week. And it’s great when I am writing them, but then I have to type a thousand words, with half an hour to spare before publishing. All I am saying is, the twice a week notebook writing may just go up.

Another thing to talk about is face unlock technology. If your phone uses that type of biometric authentication, then you know how annoying it has been over the last couple of months to unlock the phone when you have a mask on. So Apple is in the process of changing how it works on iPhones. Instead of urging you repeatedly to unlock with your face, it will push you into the passcode screen, so you can feed in your code and get to your apps faster. No changes will be required for other types of authentication methods like TouchID or other forms of fingerprint scanning.

Apple is also changing how FaceTime group calls work, so that you can see everyone in equal sized frames rather than the speaker taking up all the attention. This is so that when there are multiple people in conversation, talking at the same time, you can pay attention to everyone. After all, video calls are the new normal.

Just like Apple, Google is also making moves. It has always dabbled in multiple chat and video call services, sometimes offering them for only enterprise or personal accounts. A few years of each, and often the offerings have been killed. But now they put all their messaging services under one team and rebranded Hangouts as Google Meet, both on personal accounts and GSuite accounts. It is aimed at competing efficiently with Zoom, which has been under the spotlight for security flaws.

It all comes down to what platform everyone is using. You can use one thing, but if your clients, or your friends and family are not, you might have to switch, or use multiple things. And this is where competition increases. Big tech has been too comfortable with their spare finances to spend on services and apps that they don’t entirely work on. Zoom took over in a space that was earlier defined by Skype. And you have to have noticed that I only brought up Skype in this conversation to point out that it’s been overtaken. That should say a lot.

Moving forward, the world is not likely to operate in the same way as before. We are suddenly even more tech reliant than we were. As someone who has been an enthusiast for years now, I have got to see the flaws in using it. When 10 people are using a software, it is bound to run better than when 100 are. Multiply that with billions, and not hundreds.

Slack was down on Tuesday evening. And that does genuinely stop work for employees who are right now not sitting across from each other.

Microsoft’s Build conference is going to be online and free. Take advantage of it if you’re a developer. Oh and the lack of a Google I/O makes for a dull May.

It sometimes takes us about 5 to 10 minutes to use a screen share feature because we are not used to it. The problem is not the intuitiveness that is built into software design, the problem is billions of people not having that same intuition.

Tech is evolving. Right now it’s slow, but what is happening in the background is that tech thinking and designing is changing. I believe that it is for the better. With it, we will have to teach ourselves how to employ that tech to get the best results. And that’s okay. 2020 was the year of the future. We are facing a setback but we are getting there. 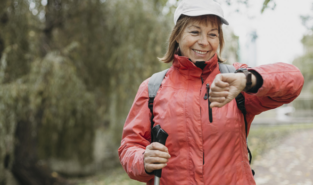 Top 7 Features your Apple Watch Hiking App Must Have