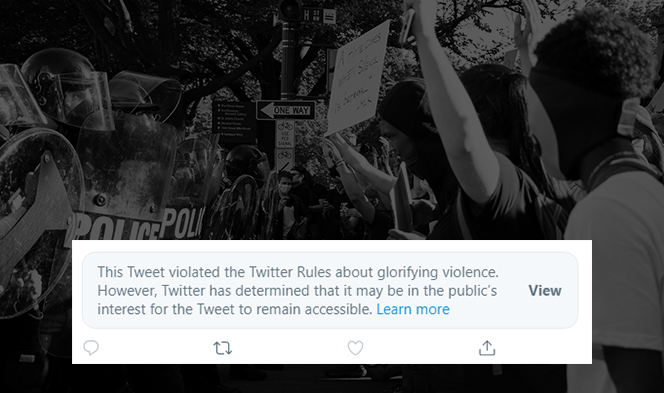 Our 2 Cents on The Role of Technology in Our Lives

It seems cavalier to write a tech update today. But tech is why we are able to do a number of things that we are doing. Holding people accountable for their words and actions.

Marginalized individuals depend on filming the actions that violate their existence in order to then post those on social media to validate it as violence so that may be, action can be taken against their violators.

The violators, the authority, does not validate it as violence after all.

Similarly, social media is used in a myriad of ways. Two very opposite ways are to incite and instigate, or to bring together and organize movements against the instigation.

Last week, Twitter as a company made a choice. They will call people out when necessary on the words they use. Facebook made the choice to allow for free speech.

The people in question here were the president of the United States, Donald Trump and his team.

Joining hands, in a way, with Twitter, Snap has decided that they will not be promoting the president’s Snapchat account on their Discover page.

As The Verge’s Casey Newton explores in his newsletter, The Interface, there is a freedom of speech issue and a freedom of reach issue. He talks about how good news media gives context and background to posts and tweets that can give readers more information. Simply reading a tweet will only give the readers the words that are depending on the freedom of speech part.

Read the whole post he wrote for an analysis of this that is much more in depth and his specialty. I would not want to rewrite in a way that takes away from his exploration of the topic.

The technology and technology platforms we use every day, empower us, employ us, and, in turn, they become our tools for right and wrong. As humans, we choose what we do with it. But as platforms, sometimes, they also choose what they do with what we publish on it. Sometimes humans curate it and sometimes algorithms. Right now, the biggest question is whether this curation should exist, and how, if yes or if no.

A movement like Black Lives Matter not only changes the way society functions, it changes the way tech companies function, it is changing the way social media platforms are functioning. It changes rules and laws. It gives perspective to things, and actions we previously ignored.

One of the most prominent figures of Silicon Valley and by and large, the tech world, Sundar Pichai, always says that he believes technology is an equalizer. But that’s not all that it does. It is used to empower, bully, teach, organize, celebrate, mourn, create, and so much more. All of those things are not done equally. Technology may equalize the access we get through it. But the access to technology is not always available in the first place. So that’s the thought I leave you with today.

What is access? And what kind of access do each of us enjoy or worse, exploit? Technology has been playing a huge part in these questions. And no the intention of technology is not to oppress. But the lack of technology does sometimes aid oppression as much as the use of technology.

How to Start Your Own Jewelry Business (A Complete Guide) All You Need to Know Before Starting a Ring Business What Nobody Told You About Starting a Necklace Business