The Future of Tech Is Convenient but What's the Cost?

Years ago, biometric security was cool and a few years before that it was limited to enterprises and movies. Then that technology came to our computers and phones at exorbitant prices. While it is now available in the mid and lower range gadgets, the compromise is security. We have all seen a protagonist use gum or silicon to take the fingerprint of the evil lab admin to do the right thing. Now that’s just done virtually, with absolutely no clarity on who is evil and who is the protagonist.

That brings me to Amazon. Yes, two weeks later, Amazon is again under scrutiny about it’s new, awesome technology – Amazon One. It is a palm reading tech that aims to work as a contactless payment card and identity card. The concept is fascinating and outright brilliant. Palms are not as front and center as face and irises, not as prone to accidental contact as fingerprints. As Amazon says, a person needs to make an intentional gesture to do this form of biometric authentication.

Where can you use it? Well, the short answer is, everywhere where they need your identity to let you enter and pay. So you can use it for public transport passes, event passes, shopping, office punches in systems (if we ever go back).

However, Amazon’s history of security is questionable. And you never know how people who license this tech will use it. As an enthusiast of all things futuristic and Spy Kids, I am willing to give it the benefit of the doubt.

Today’s list of stories to talk about includes a lot of major players. Here comes Google.

In yet another rebranding move from the tech giant, GSuite is now Google Workspace. Desks, conference rooms, and water coolers were what made a workspace. It is now replaced by documents, Slack, and Zoom. In order to fully get everyone to use their products, Google’s Workspace offers it all in one place. Tightly rolled up in one neat package with no need of clicking any buttons to allow integration access.

I am not sure if this is an unpopular opinion, but I don’t like Zoom, so this change is welcome. And I work in Docs and Sheets all day. Win-win. Google, now make it dark more on the web.

Now, on the other side,

Tech has been this big shiny thing with questionable or even rusty parts. Since the spotlight is being shifted from the shiny parts to the rusty parts with the recent antitrust hearing, the release of the social dilemma, and many other such incidents, the companies are paying attention and even trying to oil these old parts. Like Instagram, on its 10th birthday a couple of days ago, released a few features to tackle bullying and negative commenting, thereby aiming to promote civil behavior among their users. One of the features includes in-app warning pop-ups to warn or prevent users who are trying to post a negative comment on the platform.

Apart from that, Instagram also said that they will disable accounts of frequent guideline abusers and they’ve also empowered their users with a neat feature that hides comments similar to the ones they’ve already reported.

While the new things are always appreciated in tech, old ones rarely make their way back to our screens, well except a 2500-year-old Mummy and we weren’t quite satisfied with how bad 2020 was going.

That being said, Instagram is also bringing its old feature of photo map from 2016 back except it will not be public and will be applicable to stories rather than the actual feed of Instagram. This clearly is intended to work like an archive of stories and places for people to look back and reminisce. It’ll be interesting to see if this pans out the way Instagram wants it to, because the interface looks quite similar to one of Apple’s official Photos app features and I personally like to scroll through my gallery rather than on Instagram.

Some other fun updates from tech this week are:

Spotify launches their ‘Lyrics Match’ update using which you can now search for the songs that have been stuck in your head for 2 hours but you can’t figure out the name. It will look something like this:

A feature that’s part of Apple Music since 2018.

Spotify might look like it’s behind in the race with Apple Music but after closing in on the catalog size and user base, it is making quick moves and might even win the race. At least, that’s what I am hoping for. I switched from Apple Music to Spotify 6 months back and I’ve never looked back, whereas my co-writer, Kanchi, keeps on insisting I move back to Apple Music. Clearly, they’ve divided the world of music lovers in two parts. We now send songs to each other from different apps so each has to manually type the name of the said song into the particular app and hope for the best.

Since the general theme of tech is leaning towards convenience and luxury, because what do we actually do with all this time left, let’s talk about the Sound Notifications that Google launched for Android devices. More of an accessibility feature than a convenience, this feature can recognize 10 different sounds including dog barking, shouting, sirens, baby noises, and more and alert the users for the same through a push notification, a vibration, or flash. While it is not something new as it has already been done in Wear OS where the users get notifications of the sounds via sound or vibration, it can come in handy for people whose hearing is challenged, at more affordable prices. You can read about this feature in detail here.

The steps taken by big tech towards convenience have always been plenty whereas the steps towards misinformation have been limited. And that’s why even the smallest ones look gigantic like the one Facebook took yesterday by banning all pages, groups, and content by QAnon. You can get the nitty-gritty of this move from here.

The world of tech is moving towards AI and Big Data and all the other shiny things, there are still some rusty old parts that need to be paid attention to and fixed before we move ahead. Because if we didn’t, we’ll be looking at our own doomsday – caused by us and for us.

For the last little bit of the week, Apple’s second hardware event is on the 13th of the spooky month. Let’s see what candy they bring to the table. Next week’s story will be fun! Tweet us at @biztechcs if something catches your eye next week!

P.S. This article has been written in collaboration with Kanchi Vasavada and she was nice enough to let me take over her Weekly Tech Updates this week 😛

How to Start Artificial Jewelry Business? 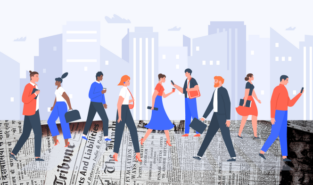